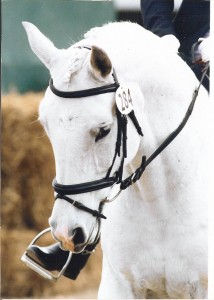 Hara Kiri Khan is a 1988 purebred Arabian gelding out of True Blue Glenda by El Tarus Khan.  He is a home bred of Darcy’s.  Hari was retired in 2005 to a very nice couple to live out his life with a few of their aged TB’s.  In 2004, Darcy took Hari to Canadian Nationals in Regina, Saskatchewan.  He won two Top Tens at Training and First Level.

Return to Awards and Accomplishments page